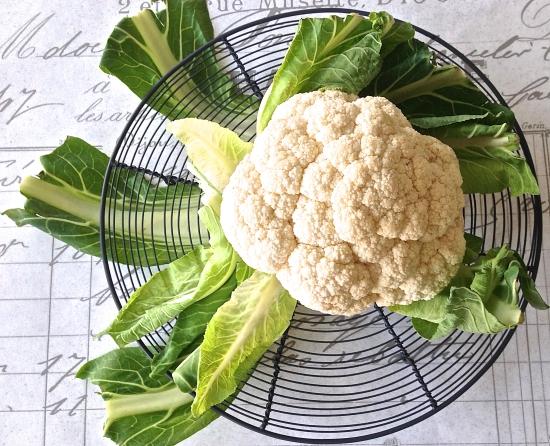 My days are filled with food and its preparation.  Kitchen-related questions pop up in my mind unexpectedly in the midst of other seemingly unrelated tasks. The study of food — of how and why it is prepared in various ways —  are my professionally acceptable obsession. Food topics make a definite impression on me. For this reason I thought I might simply be misreading the appearance of the colorful vegetable at every turn of a page. I considered it to be yet another example of looking at the world from a cook’s perspective. Yet based upon the content of my email inbox and the current topics in the social media, a vegetarian lifestyle is no longer considered peculiar or curious. In fact, vegetarianism is fashionable.

A shift of focus has most definitely turned the tables and plates full of garden ingredients are tagged as highly desirable.What at first seemed to be a casual trend is fast becoming a weekly ritual. “Meatless Monday” is in the news, even more so than the more traditional “Fish on Friday”. Completely in keeping with the new-found focus on vegetables, the simple cauliflower is now in the limelight. Old-fashioned visions of a soggy white vegetable covered in an equally vague white sauce are fortunately part of the distant past.  Instead, Jamie Oliver’s whole-roasted cauliflower with thyme and smoked paprika,  Yottam Ottolenghi’s red-onion cauliflower tart and Green Kitchen Stories’ cauliflower pizza are catching the world’s attention — just to name a few.

Popular or not, colorful vegetables have always taken the leading role in my kitchen. Although I have spotted the first green asparagus and fresh peas at the organic market, cauliflower and bright green Romanesco are fortunately still in season.  I think I’ll bake a cauliflower with my Mom’s favorite lemony-sage Parmesan sauce,  while leafing through my newest stack of cookbooks. This will make for a  perfect dinner this coming  Monday. 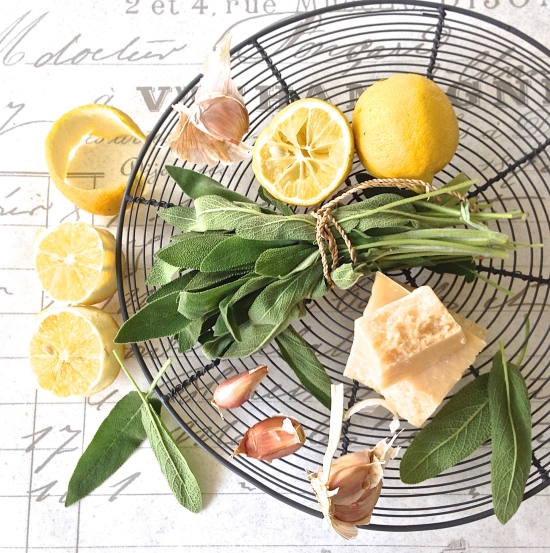 Ingredients for a pot of “Parmigiano al Limone”

Make a big pot of “Parmigiano al Limone” and let the flavors mingle for at least a half an hour — or simply make it a day in advance — saving the rest o for some grilled green asparagus later in the week — or make half of the above recipe for the baked cauliflower.

Scrub the lemons. Grate the peel of the lemons with a zester catching the thin lemon curls into a small bowl. Squeeze the juice and set both aside. Grate the Parmesan cheese, using Parmigiano Reggiano that has been aged 24 months, if available. Peel the garlic cloves. Pick the sage leaves and chop them coarsely with a sharp knife. Wash the flat leaf parsley and dry it well in a clean kitchen towel. Chop the stems and the leaves very fine with a sharp knife.

Pour the lemon juice and olive oil in the bowl of  a food processor. Add the Dijon mustard, garlic cloves and half of the grated Parmesan and mix it at high-speed two minutes. Add the rest of the Parmesan along with the sage leaves and pour in the olive oil at a steady stream with the food processor running. Continue to mix the ingredients until the olive oil is incorporated into the cheese.  Add the flat leaf parsley, a pinch of sea salt and pepper and pulse the ingredients through the lemon and Parmesan. Taste the sauce for the desired balance between savory and salty. The sage should form a background of an otherwise fresh and light dressing. Add lemon zest, a bit of olive oil, more salt or even more sage, according to personal taste. Fill a vintage jar with the sauce and refrigerate it until needed.

Serve the baked cauliflower with a bowl of zucchini ribbons dressed with olive oil, or simply steam some fresh wild spinach to match the baked vegetables from the oven. Trade Romanesco for cauliflower for an equally lovely dinner.

The John Hopkins Bloomberg School of Public Health, the world’s largest educational center for the study of health and disease prevention, introduced the “Meatless Monday” campagne in 2003. The campagne started with a simple premise — asking people around the world to prepare one meal a week without meat. John Hopkins wanted to offer a new perspective on nutrition and to inspire the use of alternative sources of protein.

Today “Meatless Monday” is a commonly accepted activity in the United States and in thirty-six countries across the globe. Read more about this initiative on meatlessmonday.com.

This post appeared in Jamie Magazine NL on February 20th 2015. 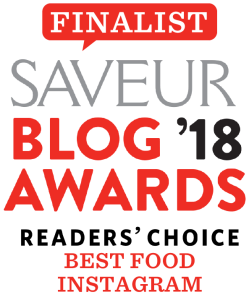