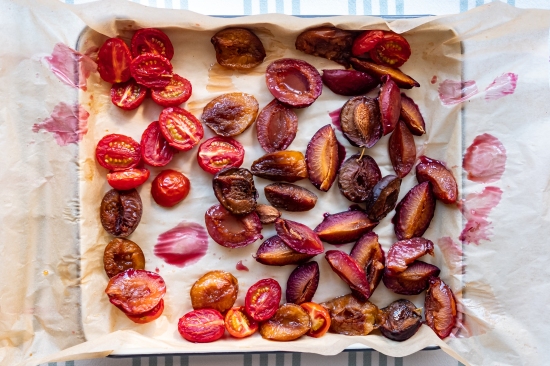 This tart was born by coincidence.  In the midst of the steamy (some say unbearable) heat of August, plums and tomatoes compete for attention. When I go to the farmers market I am absolutely inspired.  I choose color first, shape and texture later . . . and so as you might imagine, I end up with brown paper bags bursting at the seams with ripe fruit and vegetables every time I go!

Once in my kitchen, I arrange my edible treasures in bowls and turn my refrigerator into a topsy-turvy puzzle of ingredients. (Honestly, opening my refrigerator carelessly can involve multiple sorts of vegetables rolling out on to the floor, but that’s another story. . . )

As luck would have it, I decided to roast plums and tomatoes together one day,  just to create some space on my shelves. This is when the tart happened. It was a question of chance meeting destiny I think . . .

Depending on the changing harvests of the seasons, both plums and tomatoes are at their height of abundance until September, so please consider making the recipe described below!

Prepare the savory oregano pastry, as explained in my previous post. Replace oregano with any aromatic green herb available, or simply leave it out if it’s not available.

Meanwhile, preheat the oven to 150 degrees Celsius. Wash the cherry tomatoes. Cut the tomatoes in half and sprinkle them with sea salt. Wash the plums of your choice (I used a mixture of crimson and green Reine Claude plums). Cut the fruit in half and remove their seeds.

Layer a baking tray with parchment paper and arrange the plums and tomatoes on it. Pop the tray into the oven 15 minutes, or until the juices surrounding the tomato seeds have evaporated. Remove the ingredients from the oven and allow them to cool.

Increase the oven temperature to 170 degrees Celsius.  Blind bake the rolled out savory pastry 15 minutes, then remove it from the oven.

(See the Notes below for an explanation on this technique). 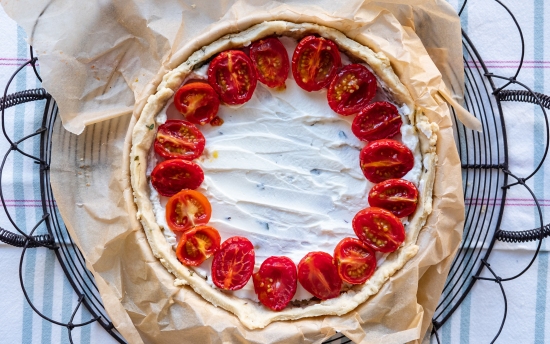 Bring the pre-baked pastry to room temperature,  then spread the ricotta evenly over the bottom.

Layer the baked tomatoes and plums in circles around the tart, until the ricotta is covered. Cut a piece of parchment paper to the size of the tart form to cover the baked plums and tomatoes. This keeps them from burning around the edges while the pastry bakes.

Bake the tart for 25 minutes in pre-heated oven at 170 degrees Celsius. Remove the parchment paper from the tart, and bake 5-10 more minutes, or until the pastry crust edges are lightly golden.

If baking a tart all sounds like way to much effort for a warm sunny day, make the pastry a day in advance. While you are at it, bake the cherry tomatoes and plums a day before you want to eat this tart too.

If all else fails and all bets are off because of the heat, spread out the ricotta onto a plate and cover  it with an abundance baked cherry tomatoes and plums. Finish the plate with a sprinkle of sea salt, some oregano leaves and a drizzle of extra virgin olive oil, and save baking pastry for a rainy day! 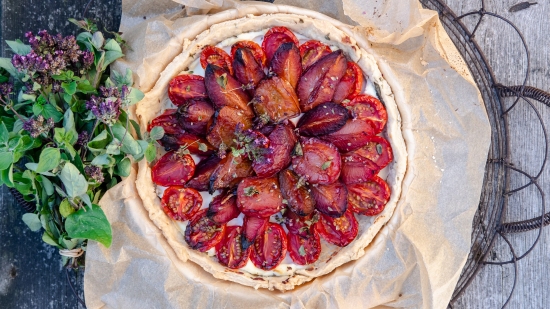 Preheat the oven to 170 degrees Celsius. Press holes on the pastry bottom with a fork, as this prevents it from puffing up. Then cut a piece of parchment paper to fit the bottom and edges of the pastry. Fill the tart form with a layer of dried beans or rice. Bake the pastry 10 minutes, then remove it from the oven, leaving the parchment and beans on top to cool slightly.Proceed with filling the tart with the roasted vegetables or soft filling of your choice. Baking times will vary according to the filling, but generally 30 minutes is the perfect timing to bake a savory tart