March 11, 2021 By Terri Salminen in Authentic Italian, Cooking with an Italian attiude, My culinary tradition Tags: radicchio variegato di castelfranco, salad for supper, the colors of late winter, vegetables of the veneto Leave a comment 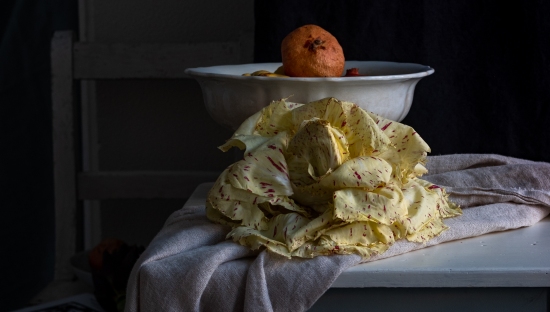 As the month of March comes around, I notice that my enthusiasm for root vegetables has deteriorated into something similar to lukewarm acceptance.

Meanwhile, my days fade one into another covered by a blanket of quietening grey skies. Although these words might sound melancholy, they are simply a reflection of the times. Actually, I am grateful for the arrival of late winter and for the goodness of crisp, bitter leaves. This is the season for gathering ideas about the beautiful radicchio.

This narrative celebrates an ingredient that goes by the noble title of radicchio variegato di Castelfranco. Like every edible plant, it has an interesting story to tell. Radicchio originates from the Chicorium genre, a part of the botanical family Asteraceae, meaning star in Greek. This group encompasses numerous genres of flowering plants, ranging from the daisy and camomile to the sunflower; it also embraces the chrysanthemum, the dahlia, the zinnia and the dandelion. A veritable nation of living things, this flower-rich family comprises vegetable sorts like lettuce, endives and artichokes; it also includes many lesser known sorts like cardoons, puntarelle, salsify and scorzonera.

Now back to the butter-cream and ruby-speckled leaves of the radicchio variegato. . .

This particular type of radicchio was first cultivated in the 17th century in Castelfranco del Veneto, located inland from Venice in the province of Treviso. The radicchio di Castelfranco just happens to share its birthplace with the 15th century High Renaissance artist known as Giorgione. It is the result of a cross between the radicchio di Treviso; an oblong shaped ingredient with burgundy leaves and broad white veins, and the escarole; yet another leafy green lettuce sort that is part of the Asteraceae family.

Radicchio variegato belongs to the Chicorae Intybus tribe.  All Latin botanical references aside, this beautiful vegetable is best known in Italian by the poetic expression “la rosa che si mangia”, which translates as “the edible rose”. Its floral symbolism is largely due to its soft, pale leaves, speckled with ruby red splashes of color.

The radicchio from Castelfranco starts its growth process in open fields, where its leaves grow green. It undergoes a fascinating process called imbiancamento, or forced whitening before it arrives at vegetable markets, looking like the flower it is named after. What makes this singular ingredient so interesting however, is that it has been an integral part of the agrarian culture of the Veneto for centuries. Together with its cousins the radicchio di Chioggia, radicchio precoce and radicchio tardivo di Treviso, it defines food tradition in this part of the world, especially in the autumn and winter.

Just what does this have to do with the  late winter salad I mentioned at the beginning of this page, you might ask ? Well, this brief history, gives context to such a noteworthy vegetable. By tracing biological lineage, I find it easier  to imagine the depth of an ingredients’ flavor at the kitchen table.  The history of food falls like puzzle pieces into place, making sense of seemingly unrelated elements of life.

I remember eating radicchio di Castelfranco variegato almost every day during foggy, Veneto winters.  It made its way matter of factly to the table, dressed with extra virgin olive oil, a squeeze of lemon juice and a scattering of salt.  Its chewy leaves and slightly bitter personality, made it a welcome end to every meal. The following salad is inspired by the combination of the bitter with the sweet. I added the intense colors of blood orange and pomegranate to create a simple dish that jumps off the plate.

Ingredients . as a main course salad for two

Separate the leaves of the radicchio from the core. Wash them in cold water, then drain them in a colander. Gently wrap them in a clean  towel and set them aside. Meanwhile, remove the peel and membrane of the blood oranges as follows. Cut the top and the bottom of the oranges with a paring knife. Place the oranges on a flat surface. Remove the peel by cutting it away from top to bottom, following the shape of the citrus. Slice the oranges, making sure to catch their juices, and set them aside in a bowl.

Now, proceed to the pomegranate. There are many methods to removing their seeds of course, but my favorite way starts with cutting the whole fruit in half transversely. Hold the pomegranate skin side up over a large bowl. Tick the seeds loose by tapping the pomegranate with a large wooden spoon. If you find it easier, you can also cut the pomegranate in wedges and gently break the seeds away from the pith under water in a bowl.

Assemble the salad on a large plate or bowl, starting with the torn radicchio leaves. Add the orange slices and sprinkle over the pomegranate seeds. Pour any leftover juices of the blood orange over the salad. Add sea salt flakes and drizzle your best extra virgin olive oil over the ingredients. Toss it gently to coat the leaves with the oil. Taste the salad for the right balance between salt, tart and savory. Add extra olive oil, salt or even a touch of freshly squeezed lemon juice if needed.

The delicately bitter flavor of radicchio makes a good companion to winter fruits like apples, pears, oranges and persimmons. It goes happily on the plate with olive oil, walnuts, and creamy cheeses from northern Italy like Gorgonzola dolce and Taleggio. This particular type of radicchio is best eaten raw.

Even though it might prove an extraordinary mission to find this particular vegetable outside the confines of northern Italy, it does pop up at farmers markets in the Netherlands every year, so I believe it can occasionally be found in the rest of Europe as well. A number of organic farmers in the United States cultivate many types of radicchio too.  If you cannot find this particular version of the chicory tribe where you live, feel free to use Belgian endive, also known by the name witloof, or even escarole.